The plethora of climate scientists have agreed that human activities are responsible for the process of climate change . Whilst our planet does release and absorb carbon naturally in a continuous cycle, the burning of fossil fuels, large-scale deforestation and other human activities have all led to the release of more carbon dioxide (CO2) and other greenhouse gasses (GHGs) than can be naturally absorbed and recycled by the world’s oceans and forests. As a result of the increasing concentration of GHGs in the atmosphere, average global temperatures are steadily rising.

This realization forced the world to come up with ways to reduce carbon emission on a nationwide level. This is when the idea of introducing carbon credits was put forward back in 1997.

What are Carbon Credits?

Carbon Credits is an incentive given to  an industry or industrial undertakings for reduction of the emission of GHGs (Green House Gases), including carbon dioxide(CO2). This may be achieved through several ways such as, by switching over to wind and solar energy, forest regeneration, installation of energy efficient machinery, landfill methane capture, etc.

Though not a panacea for all the problems , the development of carbon markets could make the emission of GHGs more expensive so as to better reflect their costs in terms of the environment. More importantly, carbon markets offer an incentive to companies to invest in energy efficiency and to switch to renewable energy. This is done through the trading of carbon credits.

The origins of Carbon markets dates back to the Kyoto Protocol . In 1997, the United Nations Framework Convention on Climate Change (UNFCCC) adopted the Kyoto Protocol, which set out quantified binding commitments to limit or reduce GHG emissions for 40 industrialized and transition countries in the period from 2008 to 2012. These countries committed to reducing their emissions by an average of 5.2% compared to 1990 emission levels. 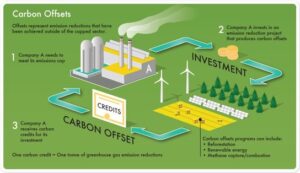 As per the Kyoto Protocol, emissions trading (also known as cap-and-trade) can be conducted between countries that have ratified the protocol. In essence, countries that are party to the Protocol are given an emissions allowance based on an emissions reduction target. In order to create scarcity, a limited number of emissions allowances are issued. This is in relation to the global target for a particular period of time. Under the Kyoto Protocol these emission allowances are called Assigned Amount Units (AAUs) and each AAU is equal to one ton of CO2 equivalent. These emission allowances (or quotas) are one type of what are better known as ‘carbon credits’.

The other two Kyoto mechanisms are project-based. These mechanisms are known as Joint Implementation (JI) and the Clean Development Mechanism (CDM). Under these mechanisms, projects that reduce GHG emissions or sequester CO2 can register their activities with the UNFCCC. When the emission reductions from their projects are cross-verified, these entities then receive carbon credits, which they may sell to other organizations that need to reduce their emissions in order to achieve their emission reduction targets (Figure 1). The amount of credits that a project is entitled to is the difference between the emissions baseline (what would have happened if the project never got off the ground) and actual emissions. 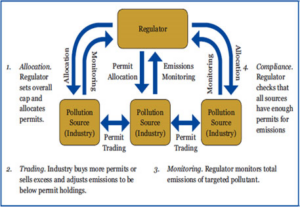 What are Certified Emission Certificate?

A reduction in emissions entitles the entity to a credit in the form of a Certified Emission Reduction (CER) certificate.

Indian industries were able to utilize the sudden boom in the carbon market. This made India and its organisations a preferred location for carbon credit buyers. It is expected that India will gain at least $5 billion to $10 billion from carbon trading (Rs 22,500 crore to Rs 45,000 crore) over a period of time. India is also believed to be one of the largest beneficiaries of the total world carbon trade through the Clean Development Mechanism claiming about 31 per cent (CDM) with some of the other Asian developing nations following the lead.

India’s carbon market is one of the fastest growing markets in the world. It has already generated approximately 30 million carbon credits, the second highest transacted volumes in the world. The carbon trading market in India is growing faster than even information technology, bio technology and BPO sectors. Nearly 850 projects with an investment of Rs 650,000 million are in the pipeline.

The CER is tradable and its holder can transfer it to an entity which needs Carbon Credits to overcome an unfavorable position. This refers to an organisation that may have exhausted their quota of emissions on carbon credits.

Carbon credits can be traded on both private and public markets. Current rules of trading permit the international transfer of credits.

Although carbon credits are beneficial to society, it is not easy for an average investor to start using them as investment vehicles. The certified emissions reductions (CERs) are the only product that can be used as investments in the credits. However, CERs are sold by special carbon funds established by large financial institutions. The carbon funds provide small investors with the opportunity to enter the market.

There are special exchanges that specialize in the trading of the credits, including the European Climate Exchange, the NASDAQ OMX Commodities Europe exchange, and the European Energy Exchange.

Taxability of Carbon Credits in India

In order to simplify the procedure and encourage trading in carbon credits, a new section 115BBG was inserted. Where the total income of an assesse includes any income from transfer of carbon credit, such income shall be taxable at the concessional rate of 10% on gross income. This however shall further be increased by the applicable rates of cess and surcharge.

No expenditure or allowance in respect of such income has been permitted under the Act. This amendment has taken effect from 1st April 2018.

The section however is not restricted to just businesses and corporate. This will encourage individual investor interest as well. Earlier, due to lack of clarity over the taxation of carbon credits investors faced serious legal issues while trading. This new section is expected to now offer a 20% reduction in tax payable on such income (as compared to the previous 30%). This may result in setting up of more environmentally conscious companies. Such companies will now be interested in making profits from sale of carbon credits and lower tax burden as well.

A valid question arises that who prices the carbon credits? It certainly is under the oversight of the United Nations Convention for Climate Change (UNFCCC). Although, it does not fix their prices as tradable certificates. It is promoted as a market commodity capable of being bought and sold in the open market, privately and be available for exchange on the commodities market, a practice that has already begun at NASDAQ and the European Climate Exchange and other commodity exchanges.

The turnover in global emissions trading hit a record high in 2019 of $214 billion as prices rose. This large jump was due to the on current and expected stricter regulations. The turnover was up 34% from 2018 and marked a third consecutive year of growth. The world’s largest carbon market, the EU’s Emissions Trading System (ETS), makes up of almost 80% of traded volume. The average price of carbon permits in the scheme rose from $18/tonne to $28/tonne from 2018 to 2019.