Coronavirus and the French Recession 2020

The coronavirus (SARS – CoV-2) outbreak is a human catastrophe which has affected millions of lives globally. Almost every country is in lockdown mode, for an indefinite time as of now. The scale at which business activities have diminished is unlike anything experienced in our lifetimes. There exists a great deal of uncertainty about its bearing on livelihoods of people, all of which depends on the containment measures and development of a vaccine. Many countries are now facing a number of crisis, the health crisis as the hospitals are working at full capacity and there is no room for “regular” patients, the financial crisis, collapsing of commodity prices as the exporters are unable to export their goods to the world. The world is heading towards the worst recession since the Great Depression.

We are facing travel bans, cancellation of sporting events, prohibition on gatherings. All the sectors are affected. The problems are really bad in the hospitality sector be it the airlines or the cruise companies, hotels & famous tourist attractions are facing reduction in activities of more than 90%.

France is witnessing its deepest recession since the end of World War II. The finance minister of the country Bruno Le Maire said “The worst growth figure in France since 1945 was -2.2% in 2009, after the financial crisis of 2008. We will probably be very far beyond -2.2%” this year”. The nationwide stay-at- home orders in the country were imposed on 17th March closing down all non-essential businesses. The country is in lockdown till 11th May.  France reported 158,050 coronavirus cases and over 20,796 people have succumbed to the deadly coronavirus as of 22nd April. France is facing a major recession. Through this article we will try to showcase the impact of coronavirus on French economy. 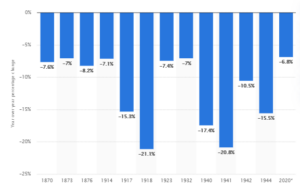 Since March 17, 67 million people in France had been made to follow the stay-home orders. The lockdown has caused the France’s economy to shrink by 6 percent, its worst performance since 1945. “Every two-week period of confinement cost us about 1.5 percent of GDP and an additional 1 percent of public deficit,” central bank Governor François Villeroy de Galhau said. Construction industry in France is believed to have taken the maximum hit, they reported an average loss of three quarters of the activity. According to the Bank of France, the economic activities have dropped by 32% in the second half of March, due to the nationwide lockdown. The service sector has taken the worst hit and a record decline in the consumption is expected in the near future. The graph indicates the largest annual contractions in the GDP of France from 1870-2020.  Clearly it gives us a grim picture as to what lies ahead.

The economy is facing a twin shock – both from supply and demand side. Supply is constrained due to lockdown, the demand for discretionary products is also declining. Consumers & businesses are expected to take all the precautionary measures to control the pandemic.  As the unemployment level rises, there will be a decline in investments from retail investors as they will keep more and more liquid funds to survive the crisis. Household savings could see a record increase due to 2 reasons: Low consumption & uncertainty around the financial position of the households.

The crisis has disrupted the supply chain affecting the demand (consumption, exports, investment) and supply (production).  The economy was hit in 2 phases, the first of which came when the virus was locally discovered in China, it impacted the international trade channels. The lockdown in China curbed the demand for products which china imported from France. Some of the worst affected industries were travel & tourism (hotels, restaurants, bars), luxury goods, and even the pork industry. China is the number one export destination. As far as the supply side is concerned, France imports a lot of intermediate goods from china. The pharma sector looks the most defenceless as more than 80% of the active ingredient used in their drugs is imported from China. The second hit came when the virus spread to the rest of the world, especially in Europe. This lead to nationwide lockdowns in many European countries, thus disrupting the trade which lead the economy to shrink. The chart above gives us a holistic view to the saving behaviour of the French people. It clearly shows us that more than half of its population’s attitude towards money has changed. They want to save more money so that they can fight the worst possible situations with the disposable income they have in their hands 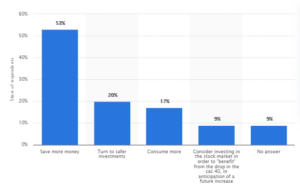 The CAC 40, which is a benchmark index used to trade in French stock market. This coronavirus crisis has taken its toll on the financial markets as well, with share prices tumbling and market caps of companies gone to their year lows. This graph shows the 10 worst drops in the CAC 40 index during the coronavirus outbreak in France as of April 22, 2020. At that time, Airbus had experienced the most important drop in the CAC 40 index value with -61.87 percent. Unibail Rodamco Wes and Renault were at the second and third place of the ranking, with -60.61 percent and -55.68 percent respectively. 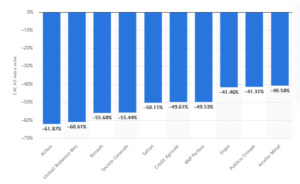 The travel & tourism sector is and will be one of the hardest hit sector in France. One of France most promising industry is taking a beating due to the coronavirus. France is full of places which could have been jam-packed with people but are not, including many iconic landmarks and charms. Experts are warning that the panic among the people could altogether sink the tourism sector. France hosted 89 million tourists in 2018 and the tourism industry is 10% of GDP of France. Organizers of the world famous music festival “Tomorrowland”, which was set to run from March 14-21 at the Alpe d’Huez Grand Domaine Ski resort in the French Alps, have cancelled the event. The annual literary event in France known as the “Livre Paris book fair” which appeals 160,000 visitors a year was also cancelled. The event was scheduled to happen in the month of march from 20th -23rd March. People involved in the tourism industry are worried about their income, in particular the tour operators who solely depend on the tourists. This graph gives us a view of loss of consumption expenditures to the tourism sector per one month due to the nationwide lockdown in France. These numbers are quite alarming and as far as the future trend shows, we are in for a nightmare. 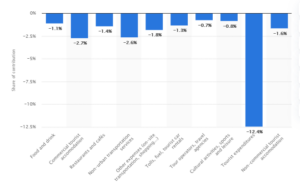 The coronavirus crisis is impacting the auto sector in direct and indirect ways. The biggest factories in Europe are temporarily closing down their operations and experts fear that a lost decade is coming. With the country in lockdown since mid-march, the sale of the sale of new vehicles has tumbled by 70% which is clearly visible in the attached graph. The data for the month of April is still awaited. The slowdown in the sales of cars will also impact the auto ancillary industry as their sales depend on the production of new cars, but when there will be less sales as compared to the normal sale, there will be a lot of unsold inventory and the production will fall thus lowering the demand of these goods and impacting the sector overall. Bugatti suspended their operations in Molsheim, France. The hypercar manufacturer said “Necessary regulations implemented by European governments to combat the COVID-19 pandemic make it impossible, amongst other things, to maintain the supply chain of production and spare parts. In addition, it is almost impossible to deliver vehicles completed in the Atelier to their owners due to the travel restrictions. “

What lies ahead in front of us is a global recession. It is inevitable, but for how long and how deep the downturn will depend upon the attainment of measures taken to prevent and eradicate the COVID-19. Governments around the globe will have to elevate the small and medium enterprises by providing them with enough liquidity so that they can weather the storm and stay afloat. The turnaround also depends on how the companies will react and prepare themselves once the lockdown ends. No one can foretell the financial damage of COVID-19, it surely depends on the policies of the government, discovery of a vaccine and the severity of the pandemic. There will be a new “normal” which will not be like the previous normal, which will be hard pill to swallow. A lot of businesses will shut, jobs will be lost, consumption patterns will change, attitude towards life will change and hopefully people will value their life more. 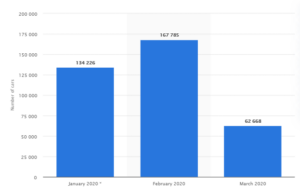